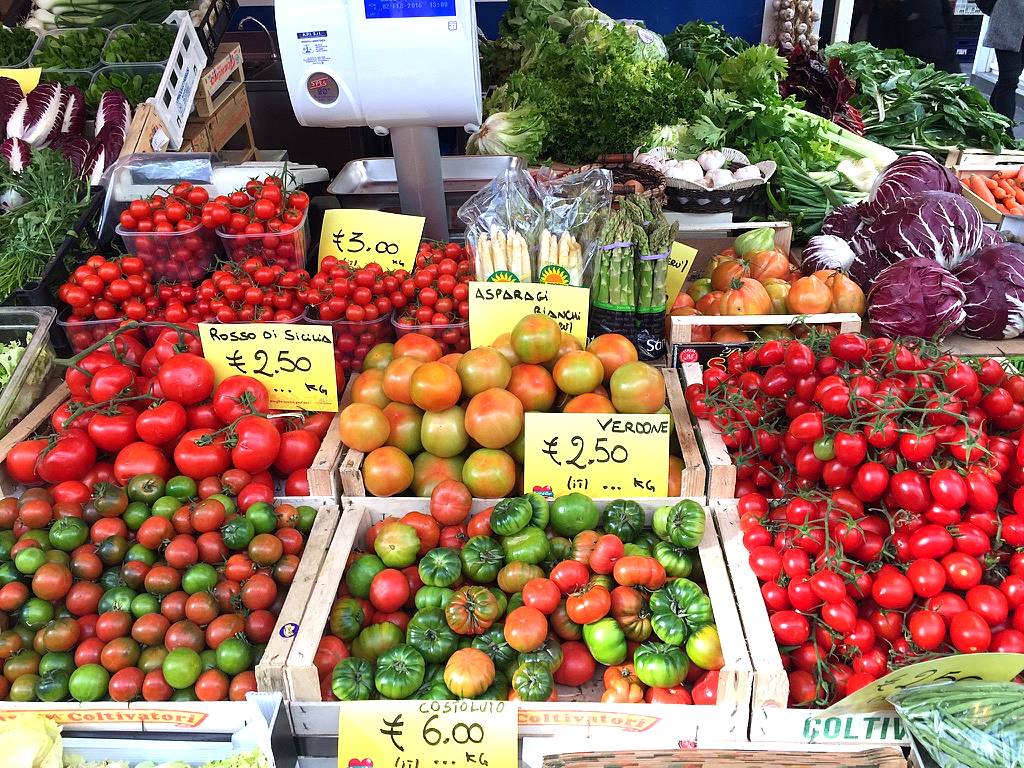 When I planned my trip to Italy, I knew food was number one on my agenda. I absolutely had to try the best pizza, the best pasta, the best gelato and the best panini! Oh wait, also the best cappuccino! I also love walking tours in Europe, because they serve as a great introduction to the city, and allow you to learn little bits of trivia from a local, that you wouldn’t otherwise come across. So what better way to check off both these activities than to take a walking food tour through Rome (that promises TONS of vegetarian food)?  Warning: this post will make you hungry!

My trip to Italy included visits to Rome, Florence and Venice. Based on all the research I had done, it seemed like the best cities for food were definitely Rome and Florence, with Rome having a slight advantage. I looked up food tours in both these cities, and let me tell you… there are TONS! You will probably get really confused, and spend hours reading up reviews for several tours (just like me). I even got tempted by the idea of taking a cooking class, but I only wanted to do one with other students in the class – for me, half the fun of such experiences is meeting other travelers and bonding during the class. Sadly, since I was traveling in the middle of the winter season, every cooking class I contacted had open slots and weren’t expecting any other students. I decided to drop the idea and stick to a walking food tour. But if you’re interested in cooking classes in Rome and Florence, I’ll be putting together a list of highly-reviewed ones I came across during my research and posting them soon.

After TONS of research, and HOURS poring over TripAdvisor reviews and blogposts by fellow travelers, I chose Eating Italy Food Tours. They have three food tours in Rome, two in a neighborhood called Trastevere, and one in what used to be the food capital of the city, Testaccio. I decided to go with the Testaccio one, simply because I had plans to explore Trastevere by myself anyway (it’s a great neighborhood, away from the tourist center, with tons of restaurants, outdoor bars and funky boutiques).

The tour is so well-organized! 7 food outlets and 12 tastings spread over 4 hours, so that you never feel too sick to try out the next dish! Special shout out to them for taking extra care of everyone’s dietary restrictions – when you make your booking online, they will ask you for any food allergies or restrictions. They made sure to have eggless alternatives for me at every outlet so I wouldn’t miss out!

The day started at 9:45am at a café in Testaccio, a quiet and fairly rundown neighborhood (but don’t let this scare you – this was one of the major ports for food entering Rome, so it has all these amazing hidden food gems)!

Stop 1: Cornetti and Tiramisu at Barberini

At one of the best bakeries in town, we were served cornetti and tiramisu cups. Cornetti is a lighter and sweeter version of the croissant, that Italians dunk into their cappuccino for breakfast. There were special eggless cornetti waiting for my mum and I when we got to this stop (thank you Eating Italy!!!). 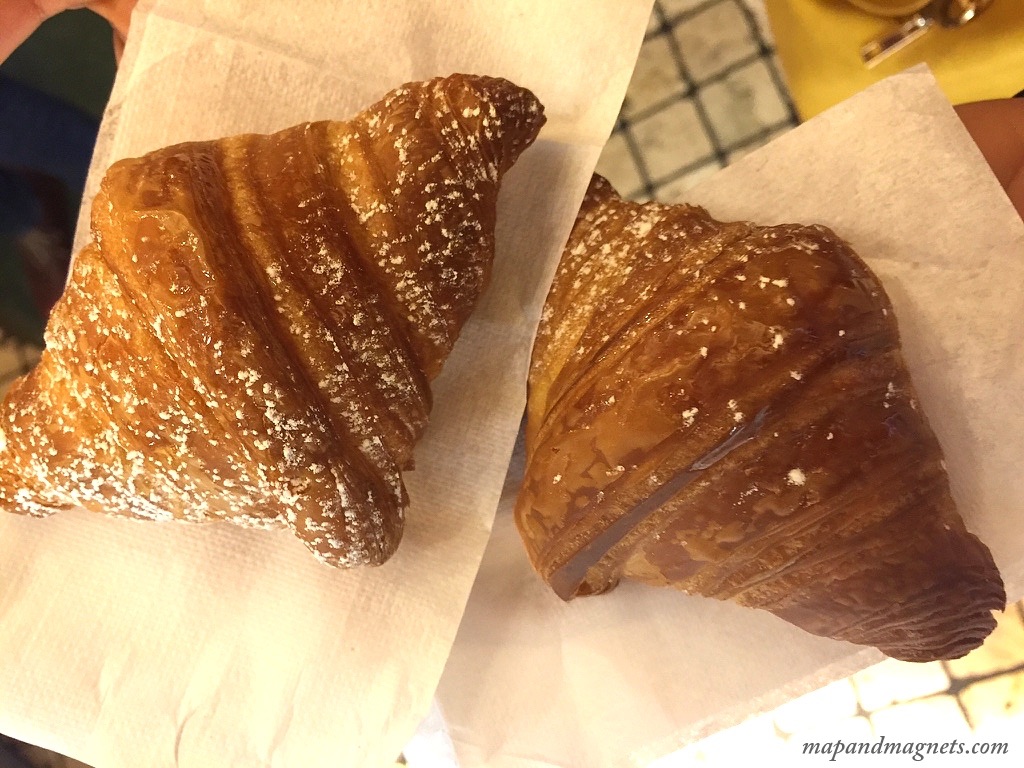 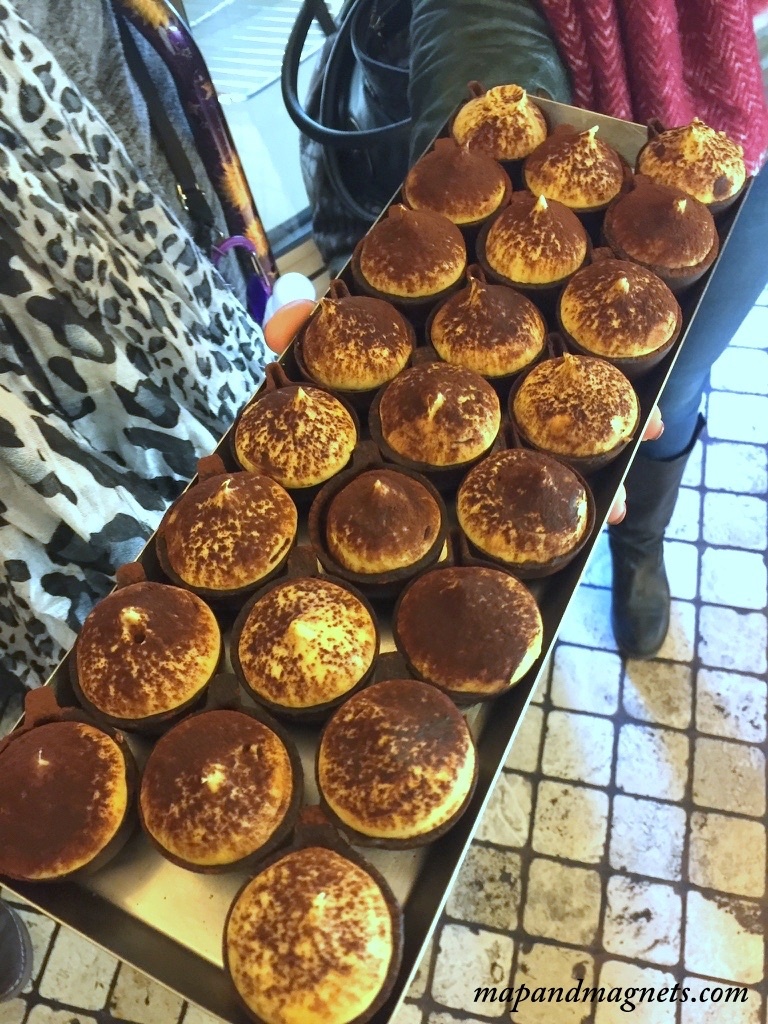 Stop 2: Cheese and Vinegar at Volpetti

This deli sells over 50 types of cheese, delicious extra virgin olive oils, and vinegar that’s aged anywhere from 1 to 100 years. Can you believe the oldest bottle of vinegar in this store costs 459 euros?!

We tried slices of parmesan, ubraico al vino (cheese soaked in white wine) and truffle pecorino… DELICIOUS! I won’t tell you how much truffle pecorino I brought back home with me 😉 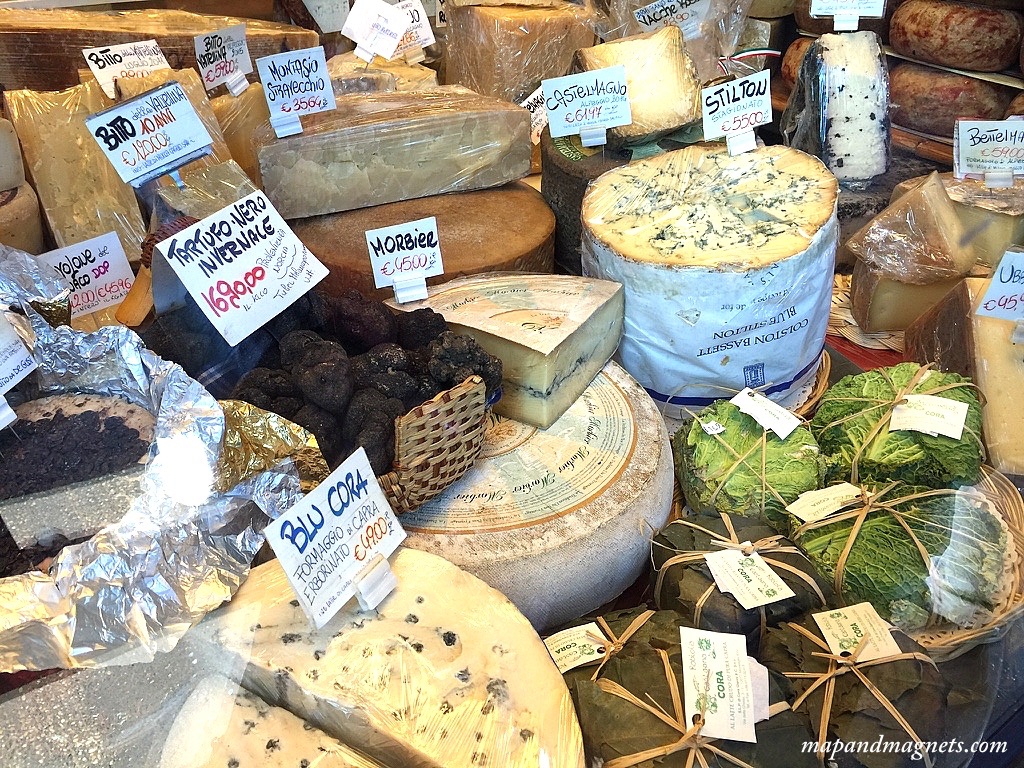 Look at that tub of fresh truffles!! 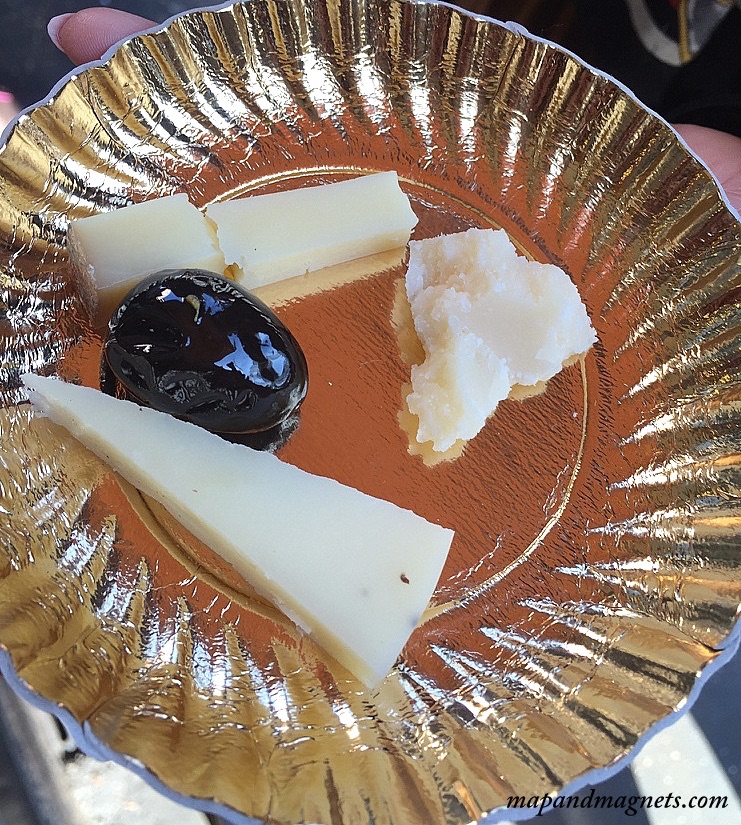 Rated one of the top ten pizza spots in the city, Volpetti Piu serves pizza “al taglio” – a concept you’ll get familiar with in Rome. Pizza by the weight – not by the slice – so you can have as much as you want! We had a slice of margarita pizza, and one of Rome’s specialties (that I had never heard of before) – potato pizza! HEAVEN! Crispy slices of potato and cheese on warm focaccia bread – I can’t even finish writing this sentence without my mouth watering. 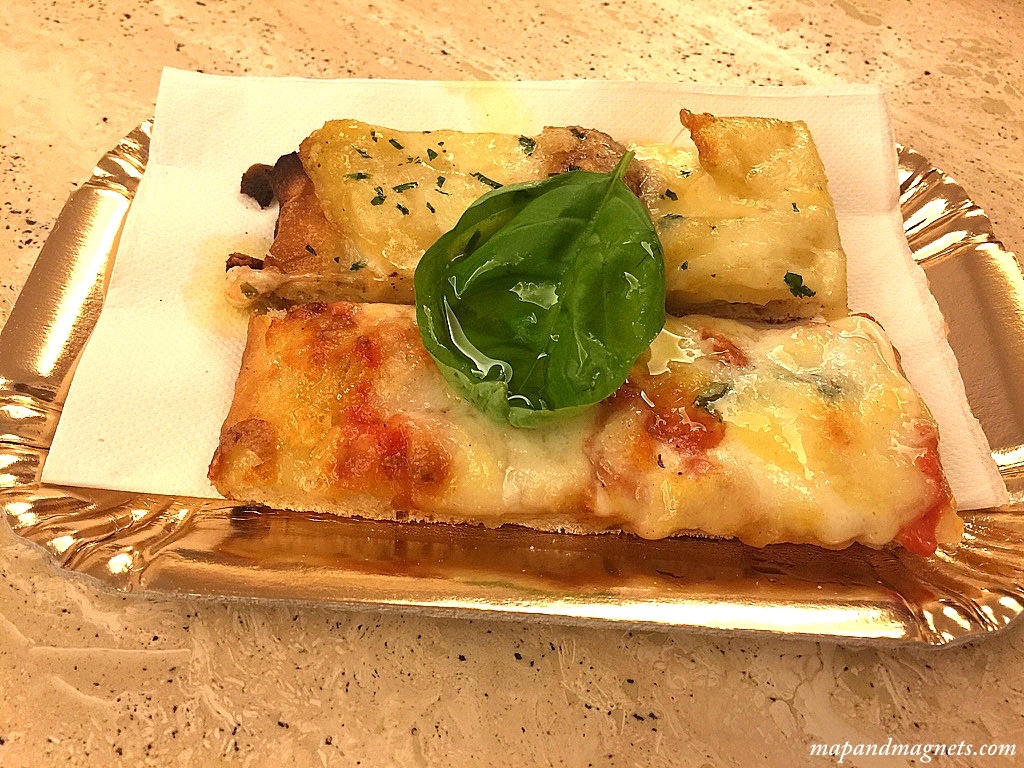 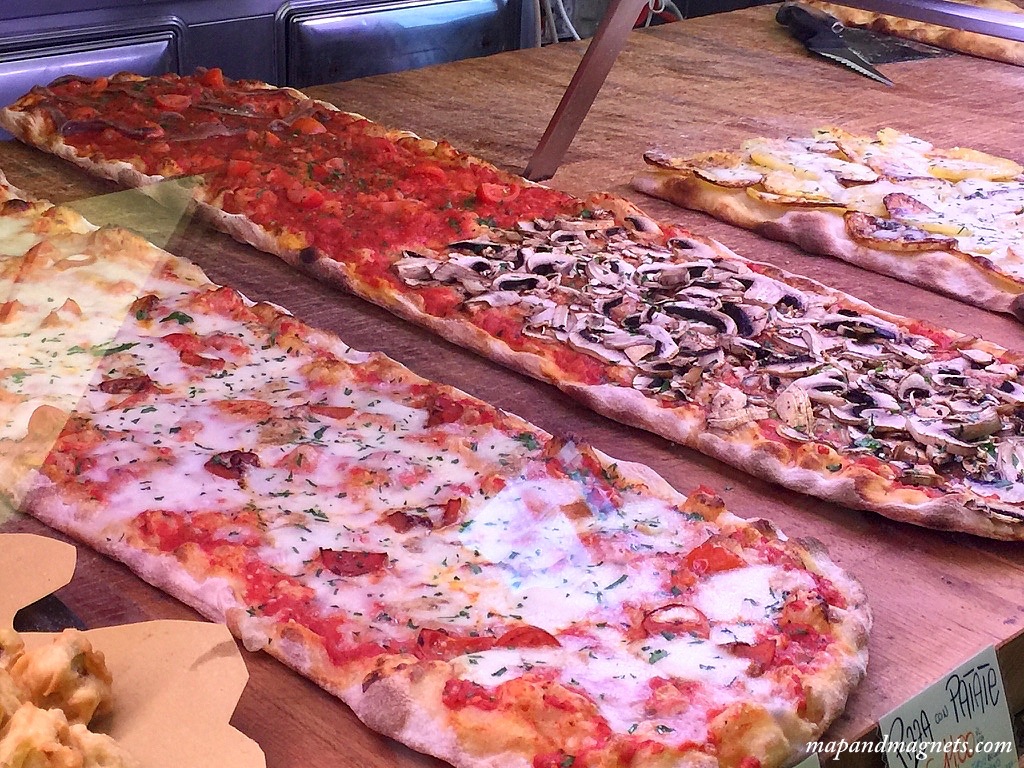 Choose how big of a slice you want!

This was a real local market – no one speaking in English, just locals going about their daily business. The market is 100 years old, and has around 103 family-run stalls, selling super fresh fruits, vegetables, cheeses, oils, breads and other gourmet items. 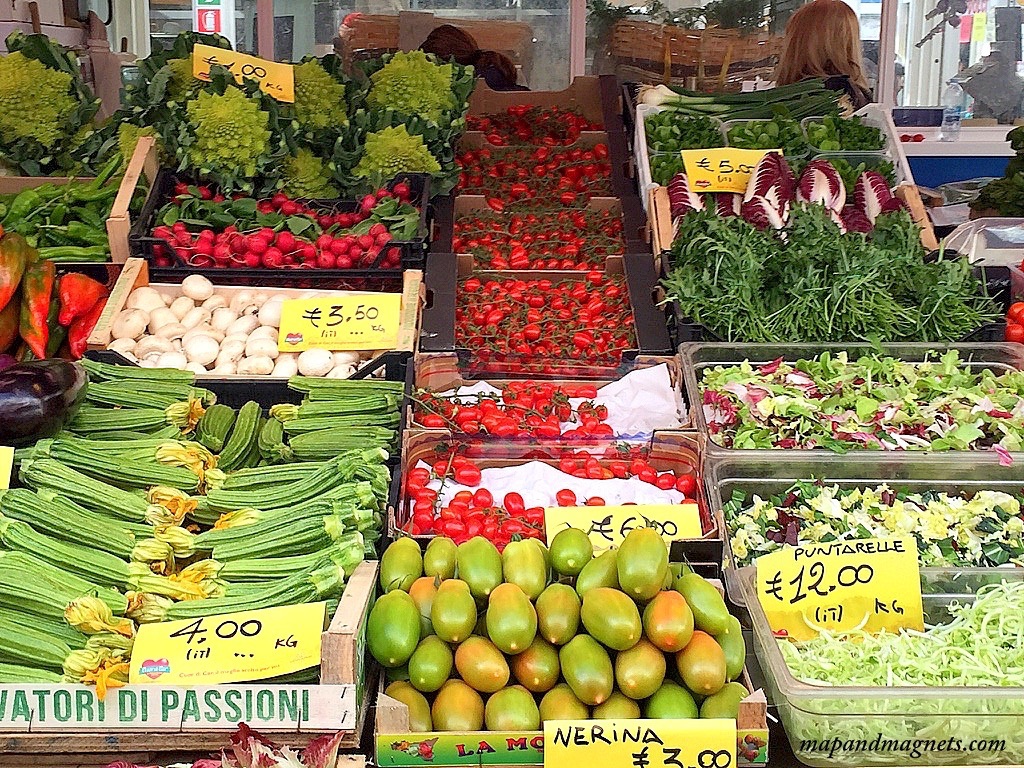 Check out those CRAZY broccolis in the back left! WOAH!

Did you know the average Italian consumes 98 kg of fresh tomatoes every year, along with 23 kg of cooked tomatoes??! No wonder they have SO many varieties of tomatoes… 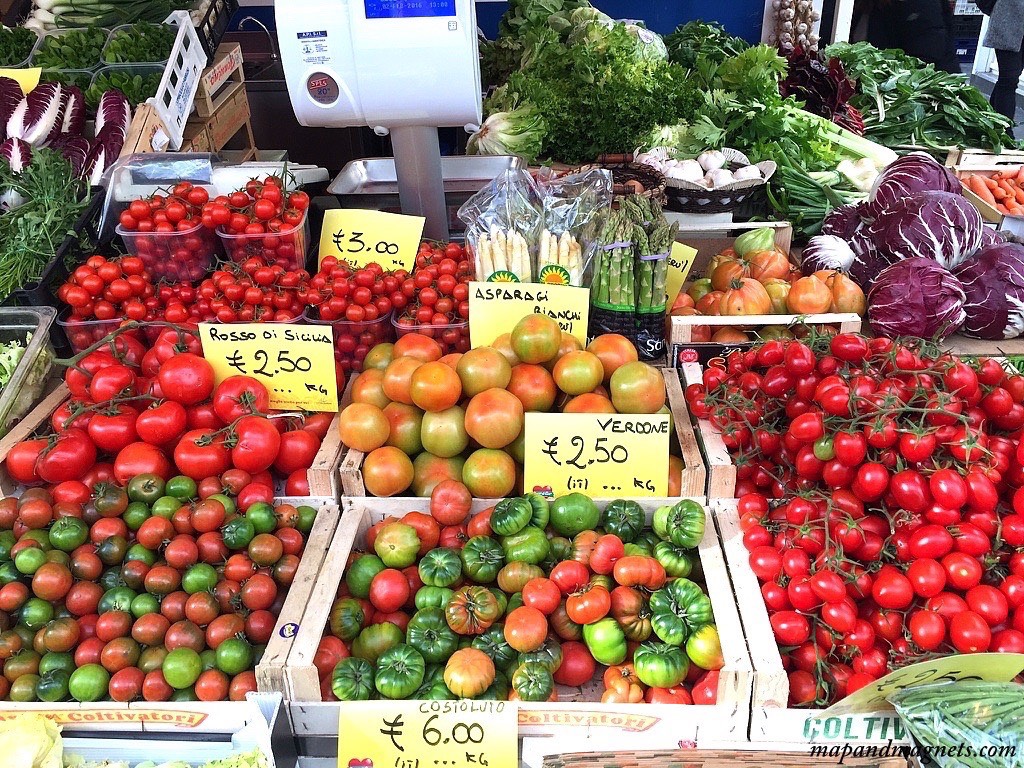 We had some bruschetta made on fresh focaccia, hot from the oven. 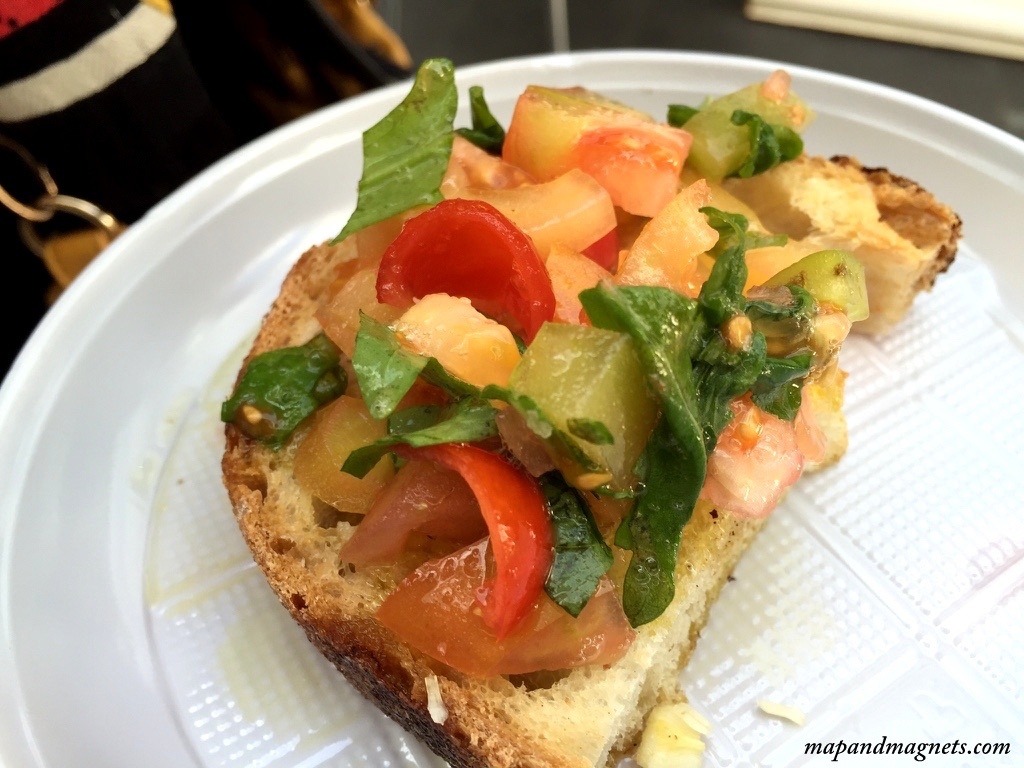 Then we tried some caprese salad with the freshest buffalo mozzarella I’ve ever had – the couple that runs the stall gets a fresh batch of mozzarella everyday! So creamy and milky!

We took a break from all the eating, and walked around the neighborhood, visiting some major sites and learning a little bit about the history of the neighborhood. Good way to make space for the next few tastings that awaited us!

When food was brought into Rome via Testaccio, it came in clay pots, and when these pots cracked, they were thrown into a pile that eventually grew into a huge hill of broken pots. The people in the neighborhood soon realized that the temperature inside the hill was several degrees cooler than outside (because of the pots), so they started building wine cellars and storing wine in the hill! Slowly, restaurants and bars started cropping up to take advantage of this unique story!

We stopped for pasta at one of the restaurants in the hill – you can actually see the clay pots through its glass windows!

There were two types of pasta: cacio e pepe and pasta pomodoro, but I could only try the pomodoro one because the cacio e pepe had eggs 🙁 I wasn’t a fan of any pasta I had in Italy to be honest, because they take al dente to the next level. I asked my tour guide about this, who said that the al dente cooking helps digest the pasta much more easily. That’s probably why Italians haven’t put on weight despite all that pasta and pizza! I’m still a biased New Yorker – no one does Italian food like Manhattan 😉 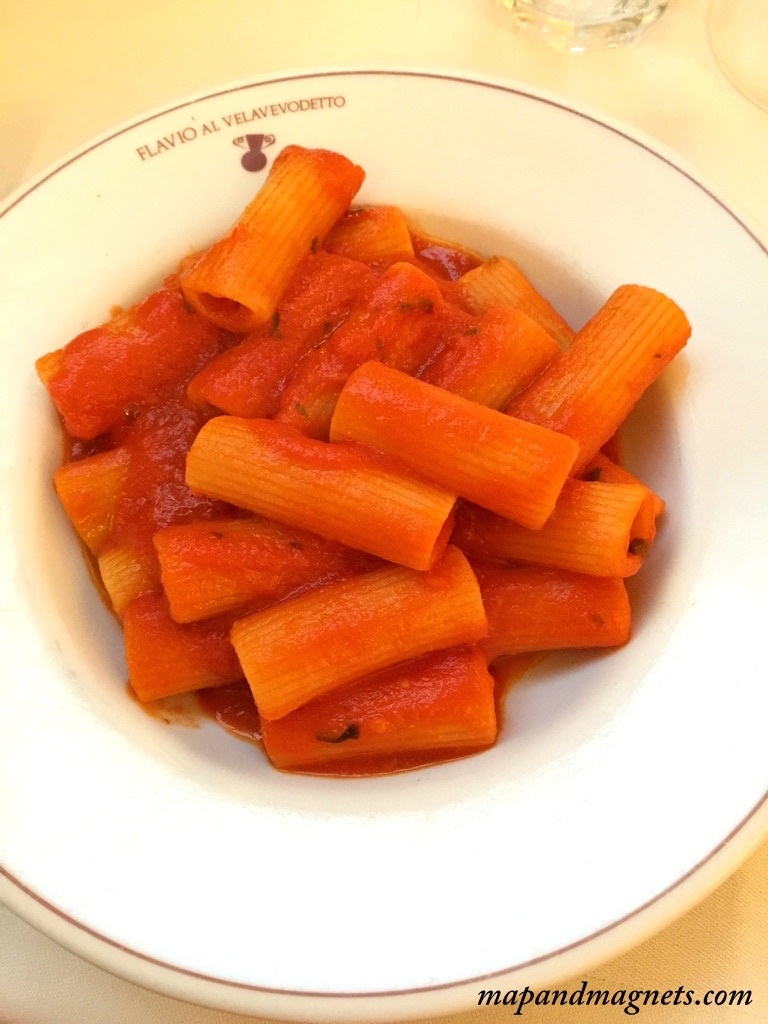 Next stop was to try some suppli, an Italian snack made of fried Arborio rice balls, cooked in tomato sauce, cheese and beef. Obviously they had a vegetarian alternative for me – a little cup of some of the best eggplant parmesan I’ve ever tried! I don’t even like eggplant but this was so good! 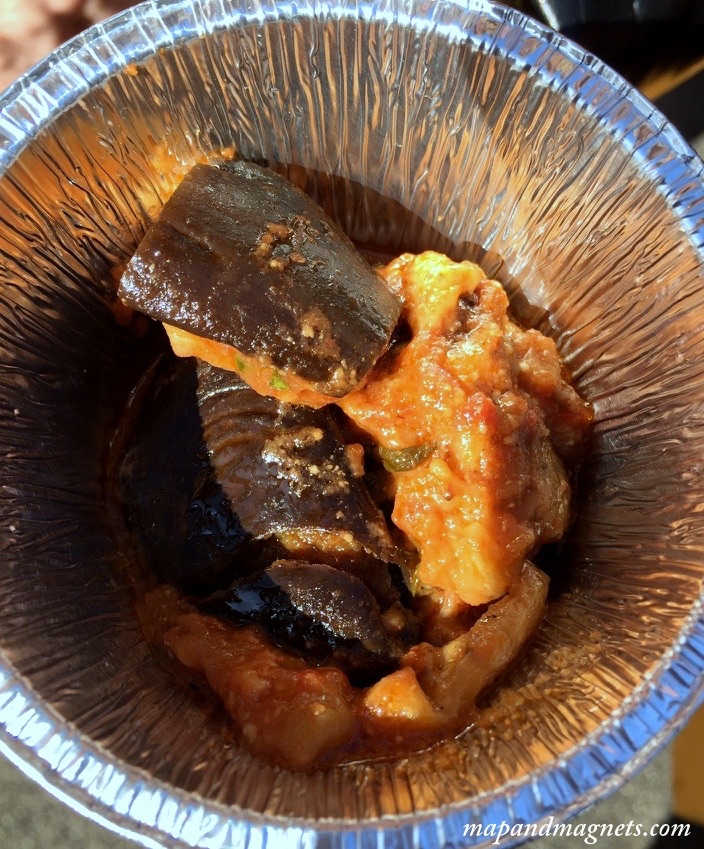 Considered one of the best gelato spots in town, Giolitti has been running since 1921 (don’t mistake this for Café Giolitti in the city center that’s run by this guy’s brother – great spot for coffee).

I had some strawberry gelato, because it was the only eggless option around (sadface) but it was SO good! It was like fresh strawberries exploding in your mouth! 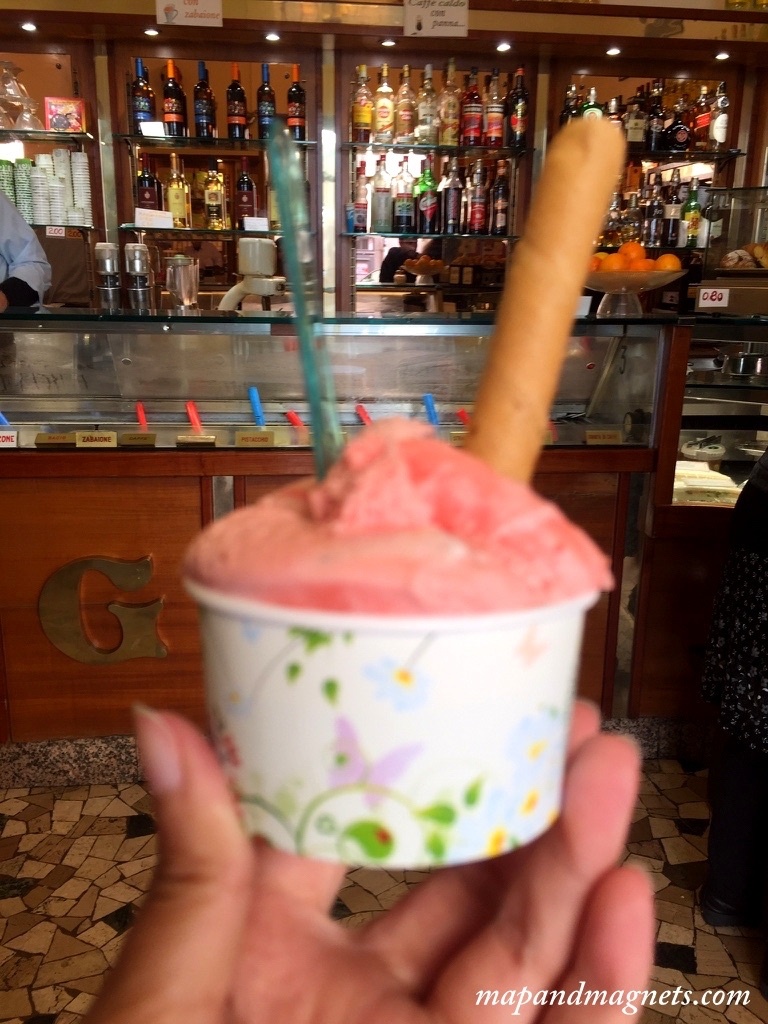 This was one of the best food experiences I’ve ever had, and I would highly recommend this tour!It’s definitely pricey (€75 per person) and I wouldn’t ordinarily spend so much on a tour, but it was SO worth it! It’s not likely you’ll end up in Testaccio by yourself just to try out a couple of these dishes. Plus what made this tour amazing wasn’t just the food tastings, but all the trivia that our guide provided – something you can only experience on the tour, and not by yourself. Check it out!

One week in Vietnam: Cities, Islands and Rice Paddies