I visited Lovefools for the first time a year ago, for a friend’s birthday, and fell in love! Lovefools is a community-style dinner experience in a cozy little bungalow, tucked away in a narrow Bandra lane, in Mumbai. If you’re looking for an offbeat dining experience in Mumbai, this is it. The décor makes you feel like you’re at an intimate dinner party in someone’s living room, and the 8-course meal means you’ll be there for at least three hours, if not more. 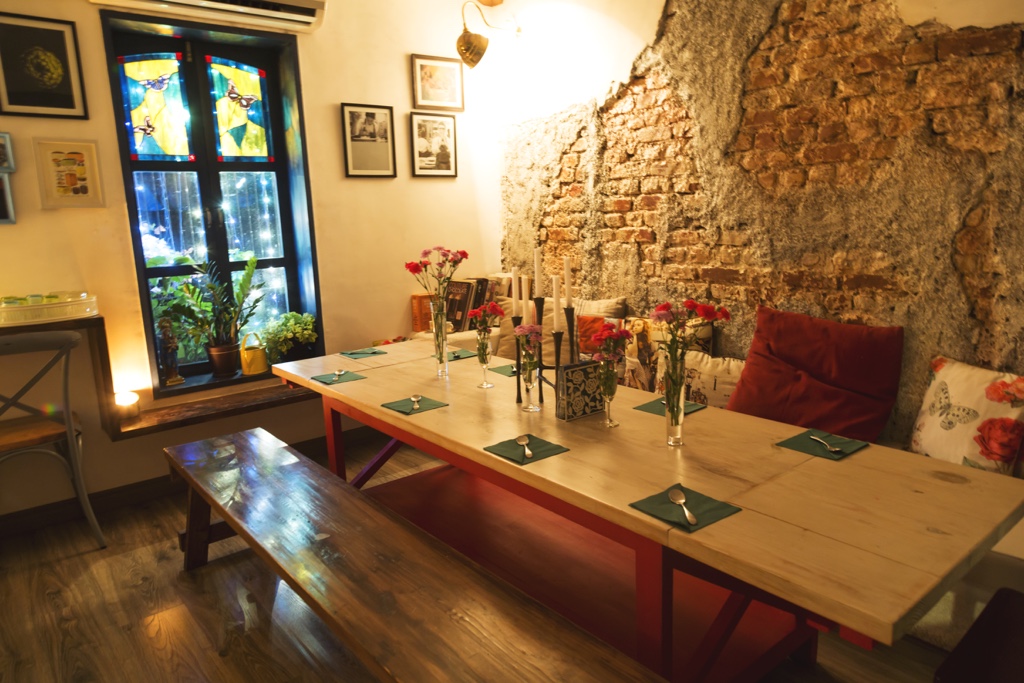 When I visited for my friend’s birthday, I happened to be on a specific religious fast where I couldn’t eat any vegetables. I knew there wasn’t going to be anything for me at this dinner, but when Chef Sarita Pereria told my friend she’d ensure a customized 8-course meal for me (taking my many dietary restrictions into account), I was shocked. I couldn’t eat potatoes, onions, garlic, ginger, or any leafy vegetables, including fresh basil, chilies and lemongrass. How was this going to be possible? But it turned out to be one of the best meals I’d had in Bombay. What did I get? Almond and pear soup, sundried tomato, black olive and mascarpone ravioli, mango and tofu dumplings, and orange and coffee sourdough bread, among other things. It was an 8-course meal, with Italian, French, Vietnamese, Thai, Japanese, Middle Eastern, and Spanish dishes.

I decided to catch up with Sarita, and learn more about her journey setting up her own culinary venture!

What made you want to become a chef?

I actually had a solid career in advertising! But I always had a passion for cooking. In fact, I had converted my mom’s kitchen into an experimental studio, where I would try out new dishes; I never repeated a dish! My husband and I would often have arguments because he’d want me to make something he had really enjoyed a few months ago, and I would never want to repeat a recipe! For years, my friends and family would push me to make the career switch. But I never had the time to study or the luxury to go away to culinary school, while juggling my advertising career. So I started buying cookbooks by professional chefs and learning techniques in my mom’s kitchen. How did you finally decide to make the switch? You said you’ve never been to culinary school…

I applied for a course at Le Cordon Bleu and was almost about to pay up the enrolment fees, when I came across a Harvard lecture series by Nando Jubany; he runs a Michelin star restaurant, serving up Catalan fare, an hour from Barcelona. His lecture was focused on the science of emulsification – mixing water and oil molecules. I can’t really put a finger on it but something about his lecture, his way of teaching, and his passion for food really resonated with me. Interestingly, his lecture wasn’t even in English. But as they say, passion has no language! I really connected with what I saw on screen. So on a whim, I wrote to him (knowing full well I had never been to culinary school or stepped foot in a professional kitchen) and asked him if I could work with him for a few days. He replied a few weeks later inviting me to come train with him for a few months! The chefs at Can Jubany, Spain

Wow! What were the next few months like, training at a Michelin-star restaurant?

Can Jubany is located in a small Catalan town. There was only one Airbnb listed there! That’s how tiny it is. The next few months were exhausting and exhilarating in the best possible ways. The restaurant has its own organic farm, so we would pluck fresh vegetables and cook them the same day. All the other chefs came from small Spanish villages with population sizes of 120 people; none of them spoke any English, and it was a male-dominated kitchen. I would try to use Google translate when I could, but we weren’t allowed phones in the kitchen, so it wasn’t always as easy.

We would work long shifts from 9am-2am. Nandu also has a huge catering business, so sometimes our shifts would go from 2am-5pm. We would cater for over 8000 people at stadiums across Barcelona, and Nandu expected us to plate up each of those dishes with as much perfection and precision as the ones we’d serve at the restaurant. Those few months were unlike anything else I’d ever experienced! Sarita during her training in Can Jubany

What are some of the biggest lessons you took back from your time in the Can Jubany kitchen?

So much! The most important lesson I learned was to be exceptionally perfect with everything you do. Nandu had this madness for perfection, for hygiene, for the plating being absolutely spot-on. His philosophy was: “If people are spending their money on it, then everything is important.” Every single chef who worked there brought so much dedication to the kitchen. I had never seen this kind of work ethic before, and that’s what I wanted to bring back with me to India. The other thing that really struck me was the way we perceive fine dining. Nandu always emphasized that as chefs, we should let our food constitute the fine dining experience, not the ambiance. Such a simple and obvious philosophy, yet grossly ignored around the world! All the chefs in training at Can Jubany 🙂

So from Can Jubany to Lovefools… what was that journey like?

I moved back to India three years ago, excited about starting something of my own. But what did I want to start? What was my signature style? What drove me? After a few months of soul searching and looking for spaces in Goa, I finally found this amazing space in Bombay, in the bylanes of Bandra. Initially, I used it to host a few dinners for friends, who brought some of their friends along. I experimented with courses and cuisines, trying to find my approach and niche – sometimes serving 18 courses, sometimes 26! I continued hosting community dinners for friends, until my ideas became more distilled.

Over time, I realized that flavors were the biggest driving force for me, more than cuisines. They break boundaries and can be reinterpreted across cultures. And so the idea of Lovefools was born! The concept of community dining with 12 strangers was coincidental, thanks to my friends bringing along their friends for my initial dinners. What can someone expect from a Lovefools experience?

It’ll be a community dinner with 11 other people. Of course, you’re welcome to sign up with friends. The idea is to curate an 8-course menu you haven’t seen before! I’m also trying to research and innovate with new flavor combinations, so I try to test out at least 1-2 edgy dishes every dinner to gauge my diners’ reactions. I generally get a sense from the group beforehand of their dietary restrictions, their cuisine preferences and their openness to experimental dishes, and curate the menu accordingly. So whether you’re vegan or Jain or have certain allergies, we’ll take care of it! In fact, it gives me more of a challenge 🙂 What are you excited about in the kitchen? What motivates you?

I’m always looking for ways to push people’s palettes, to get them to like something different. How do I get people to like blue cheese? Can I introduce exotic cuisines such as Scandinavian to the Indian audience? How can I add flavor to vegetables while also preserving their taste? These are the kinds of things I’m thinking about, and that keep me excited in the kitchen!

Let’s do a quick rapid fire!

Favorite Indian cuisine? Anything from Kerala

Next cuisine/technique you want to experiment with? Japanese. I really want to go work in Japan for a few months, they are crazy about perfection and food, a deadly combination!

Food is one of my favorite things to experience when I travel. Given that I’m vegetarian, and don’t eat egg either, I have to look doubly hard to ensure I have a true, local experience when it comes to food. Lovefools was one of the most amazing dining experiences I’ve ever had. In one sitting, I tasted Italian, French, Spanish, Japanese, Vietnamese, Middle Eastern, and Thai. I’m a big fan of offbeat experiences, and so, I had to write about Sarita’s story.

*This post was not sponsored by Lovefools, and all opinions are my own. It was just a story I really wanted to share 🙂 Thanks to Sarita, for sharing the photos in this post.