A tiger safari had been on my bucket list for a long time – not just to catch a glimpse of this endangered beauty, but also because I hadn’t been on a wildlife safari since I was 10. When an opportunity to go to Ranthambore popped up, I was so excited! Planning a tiger safari in Ranthambore can be a little challenging because of the minimal information available online. Here’s everything you need to know to plan a perfect tiger safari and (almost) guarantee tiger sightings.

This is one of the best national parks in India for a tiger safari, and considered to be a wildlife photographer’s dream because it’s the most scenic! It was also home to one of the most well-known tigresses of the wild, Machli, who died in August 2016 at the age of 20, far outliving the average age of the Royal Bengal Tiger (usually 10-15 years). Machli lost her teeth 7 years ago, making it impossible for her to hunt for food. Park authorities had been feeding her since then to keep her alive. Machli is one of the world’s most photographed tigers, bringing India $10 million a year in tourism; she’s the world’s longest surviving tiger in the wild, and has had an iconic (and successful) fight with a 14-foot crocodile. Over the years, she gave birth to 11 cubs whose descendants make up half the forest’s population! 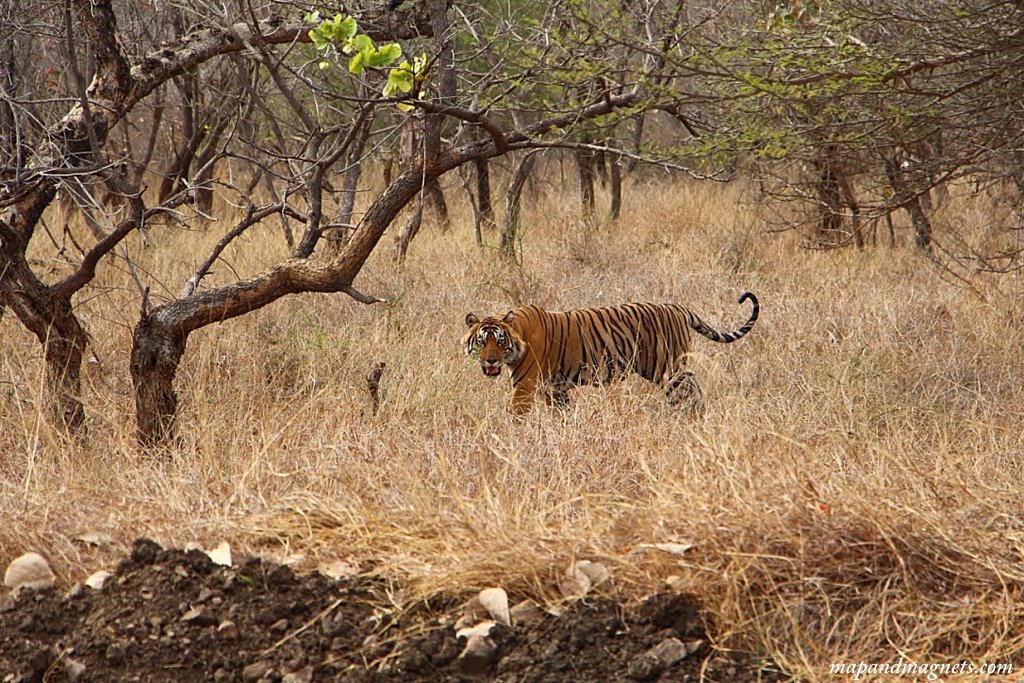 The park zones: an overview

Ranthambore National Park is divided into 10 zones. The forest originally took up only 6 zones, but as the tiger population started covering more territory and moving further, the forest region had to be increased to 10 zones. There are approximately 60-65 tigers in the forest, but since only 20% of the forest area is open to tourists, chances of spotting the tigers are reduced further – there are about 15 tigers in the area accessible to visitors. This seems like a small number, but don’t worry – I saw 5 tigers on 6 game drives (in 3 days). There are also leopards, sloth bears, blue bulls, and samba deer! 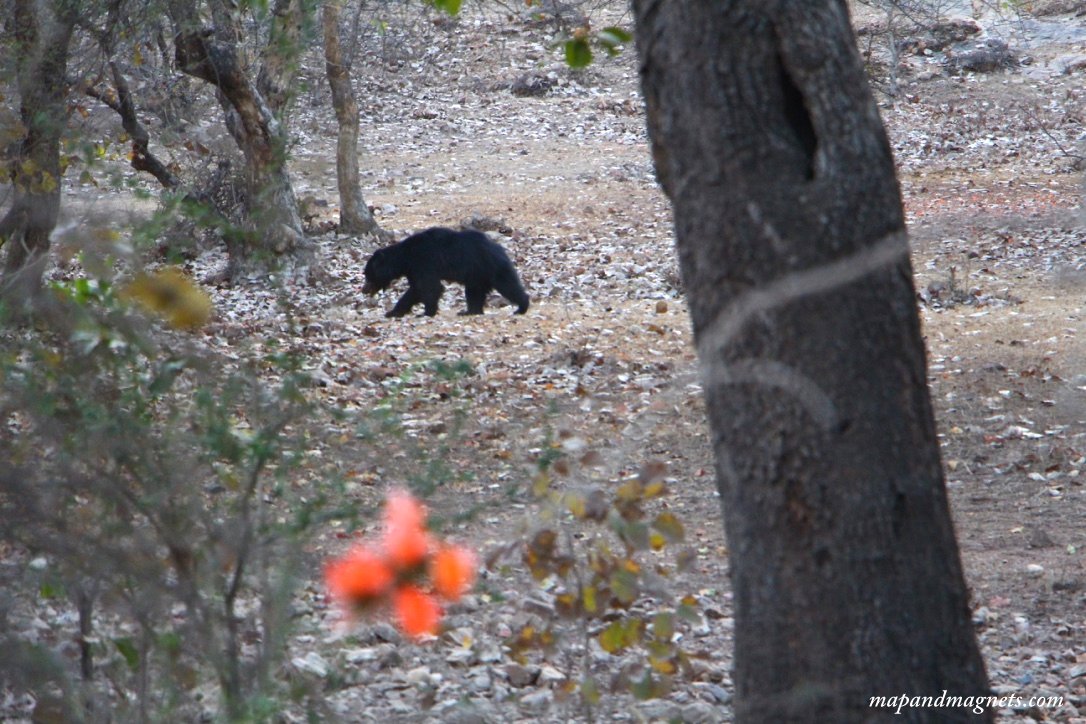 Sloth bear sighting! There are only 30-40 in the entire forest, and extremely rare to see. Got so lucky! 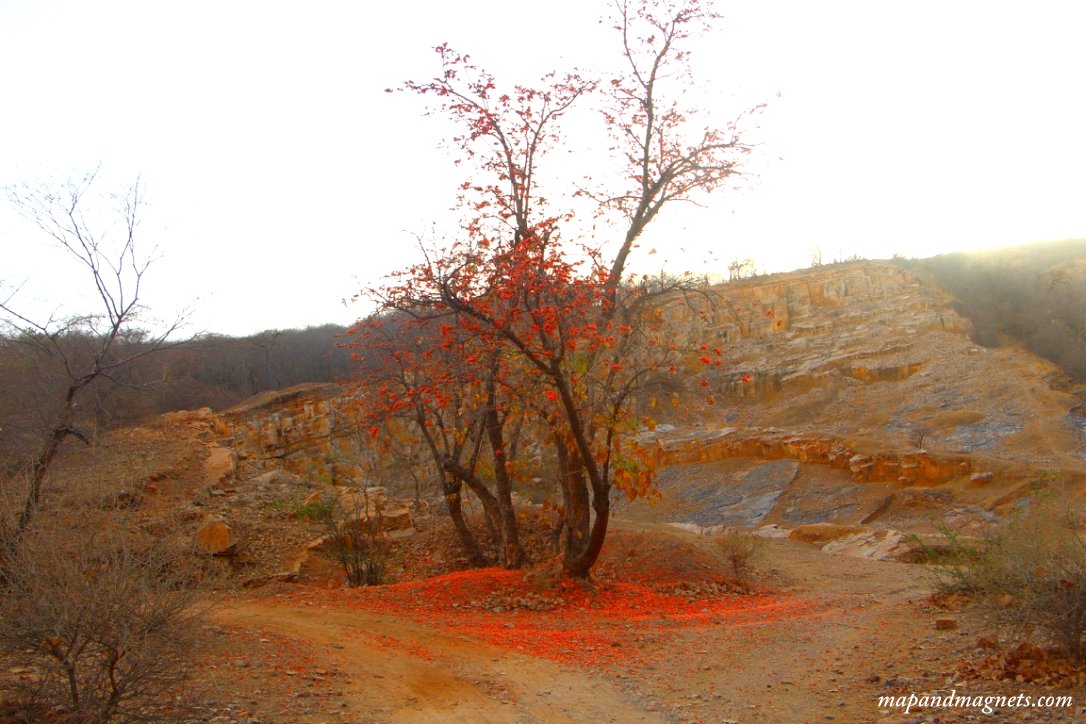 Very interesting foliage in the forest! 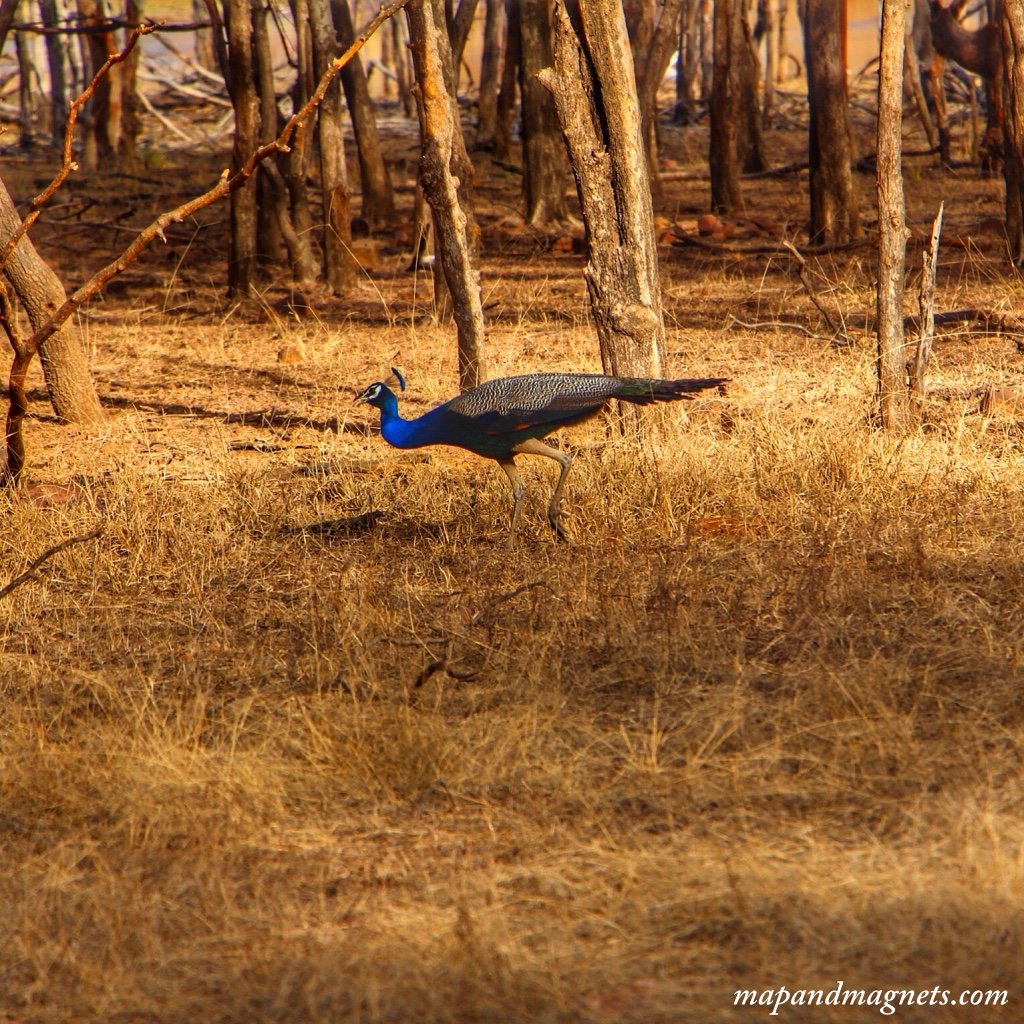 They say that zones 3 and 4 are the best for tiger spotting, because they have huge lakes and (especially in the summers) tigers come out to drink water. While this is definitely true, our guide told us that the population has spread out across the zones quite a bit, and it’s now completely dependent on luck. I spotted 2 tigers in Zone 7 and none in Zone 4. 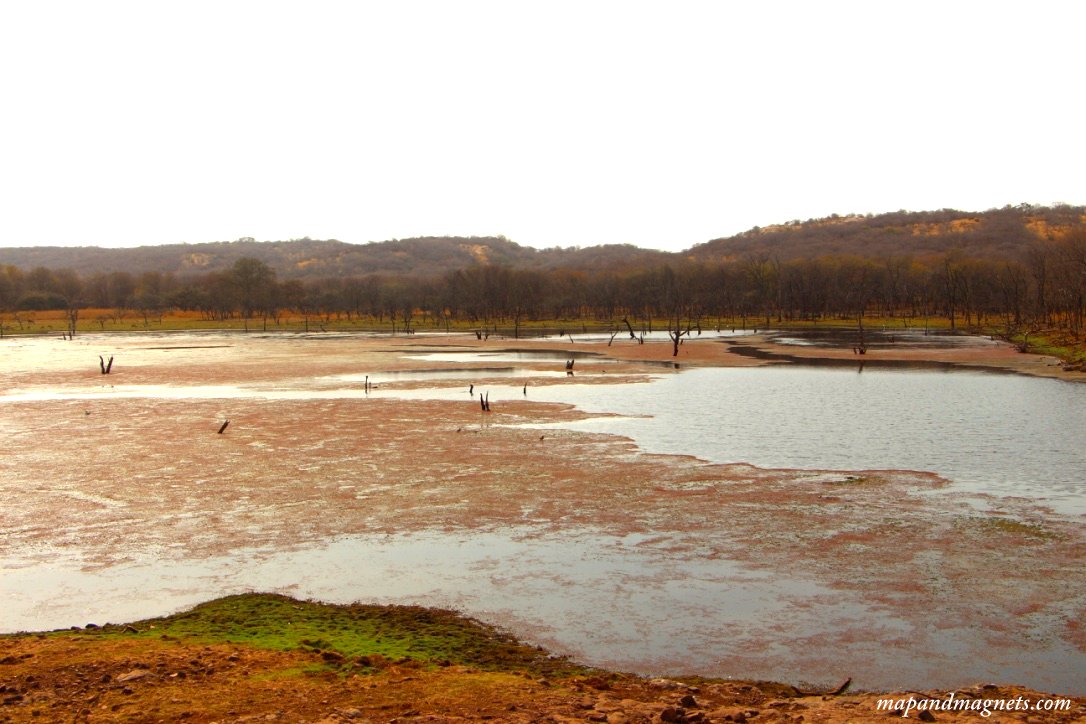 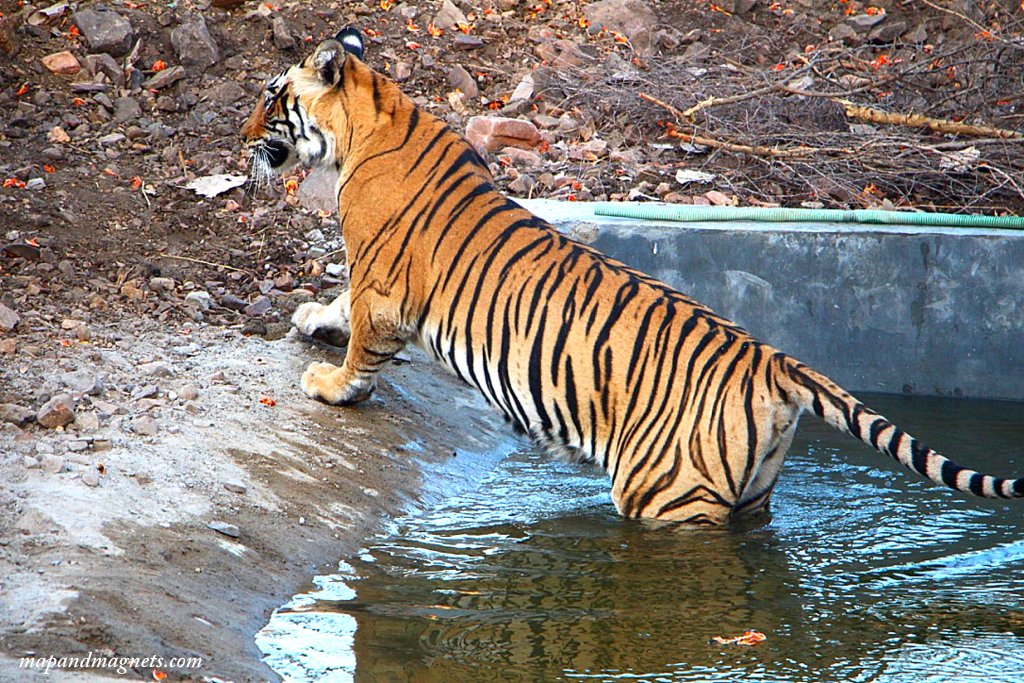 Check out the pose this tigress was striking as she entered the water on a hot summer afternoon! 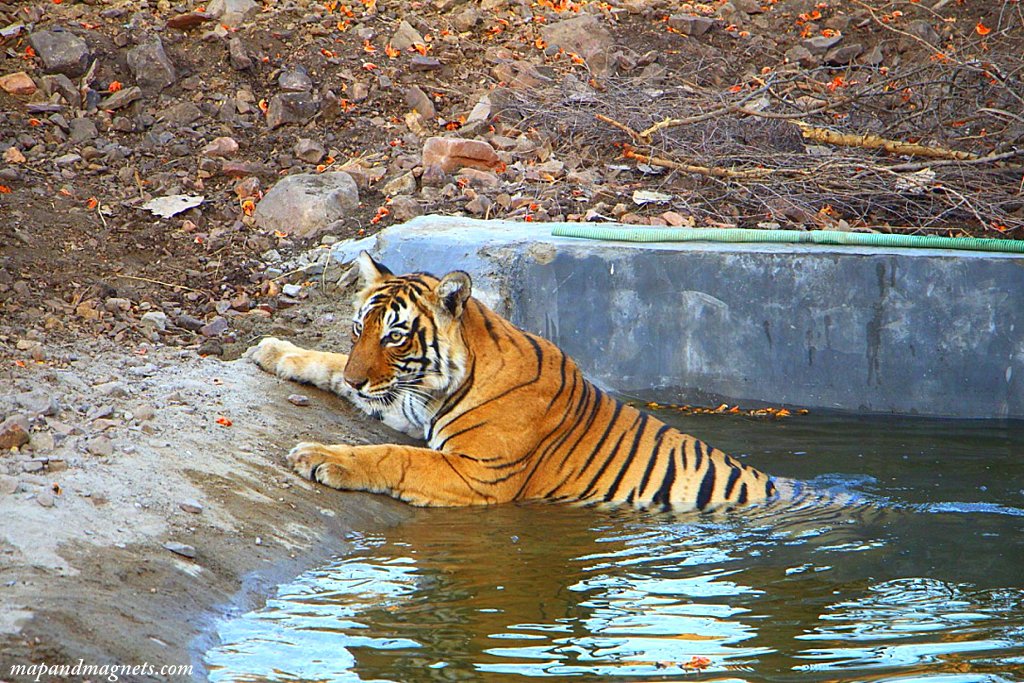 …and then she casually hangs out!

The Forest Department only allows a certain number of vehicles into Ranthambore National Park each day; to book from the official website, you would have to plan your trip well since the permits become available 90 days in advance, and sell out almost immediately. This is a good option if you are flying international, as you will likely have your itinerary planned by then. 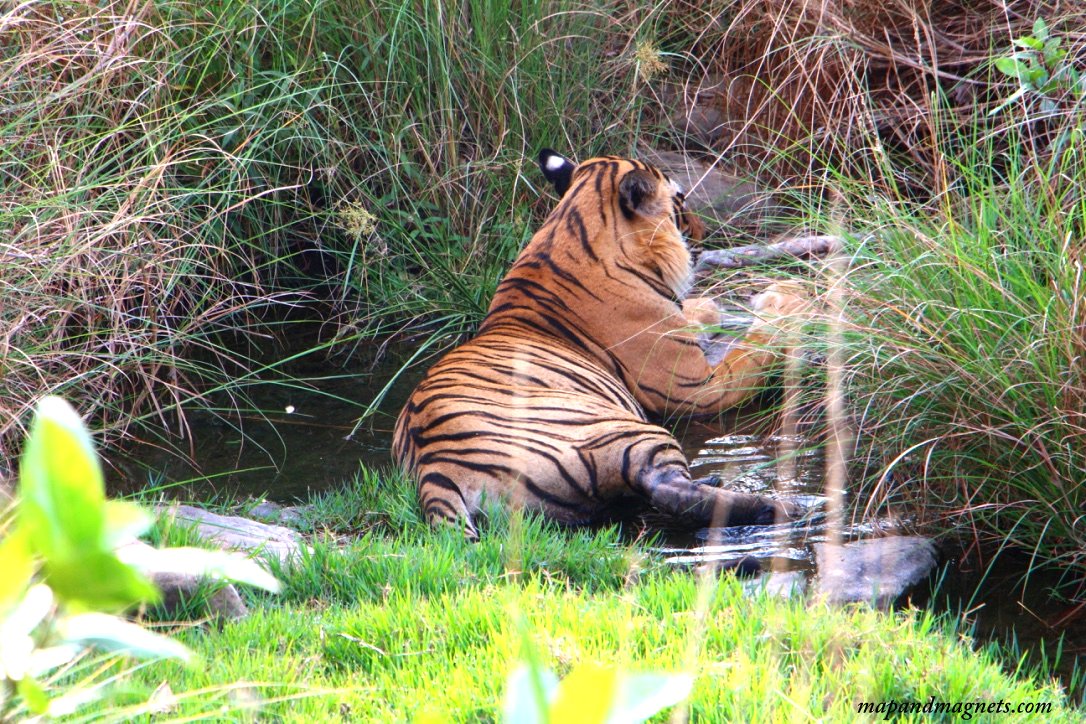 This tiger found himself a nice afternoon spot 🙂

However, if you are from India, chances are you aren’t going to plan the trip 90 days in advance. In that case, here’s how tiger safari booking works (it’s so confusing, and you’ll hear a lot of conflicting stuff, but hopefully this will save you the trouble I went through!): 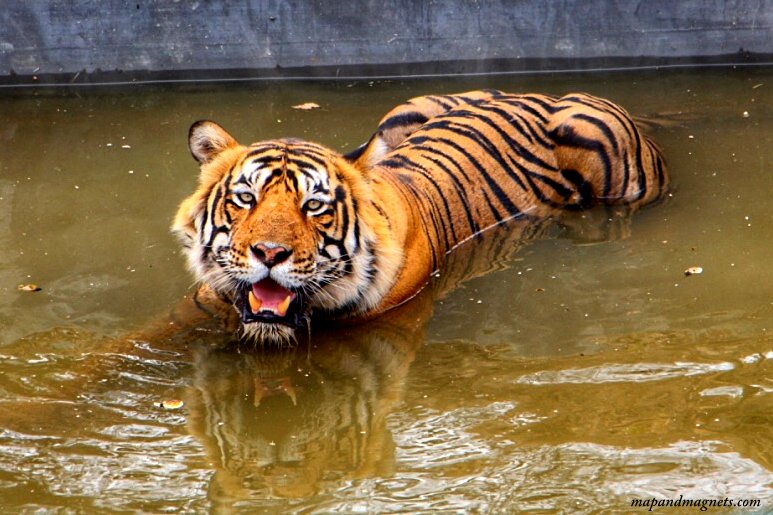 Literally watched this one play in the water for an hour! 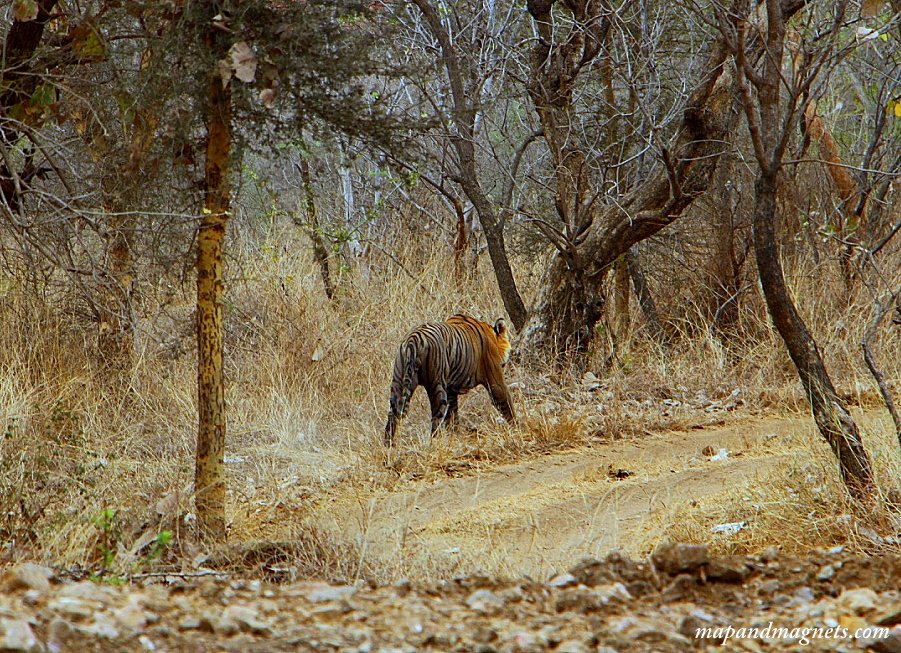 Check out the color contrast on the tiger’s skin after soaking in water for an hour!

There are hotels for every budget in Ranthambore, but here are some of the best ones for a little bit of a luxurious experience – you are going on a safari after all 😉 these hotels tend to get full quite quickly so try and book as early as you can (at least 3 weeks in advance). 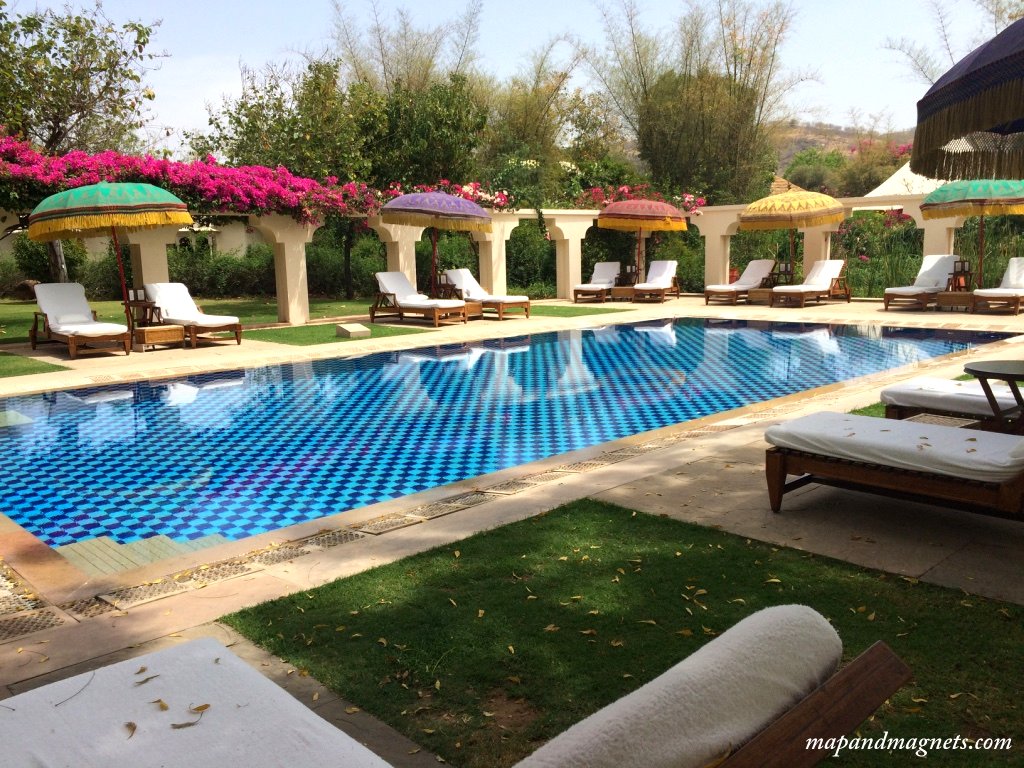 What to expect and how long to stay

Try and do at least 4-5 safaris to increase your likelihood of seeing the tiger. There are two safaris, one in the morning (6:30am-9:30am) and one in the afternoon (3pm – 6pm) but timings vary a little bit based on the season.

There are two types of vehicles: 6-8 seater gypsies, and 20 seater cantars. The cantar is cheaper, but I wouldn’t recommend it for anyone with back problems as the forest roads are REALLY bumpy and you could really hurt yourself. Not to mention you’re competing for camera space with 20 other people. 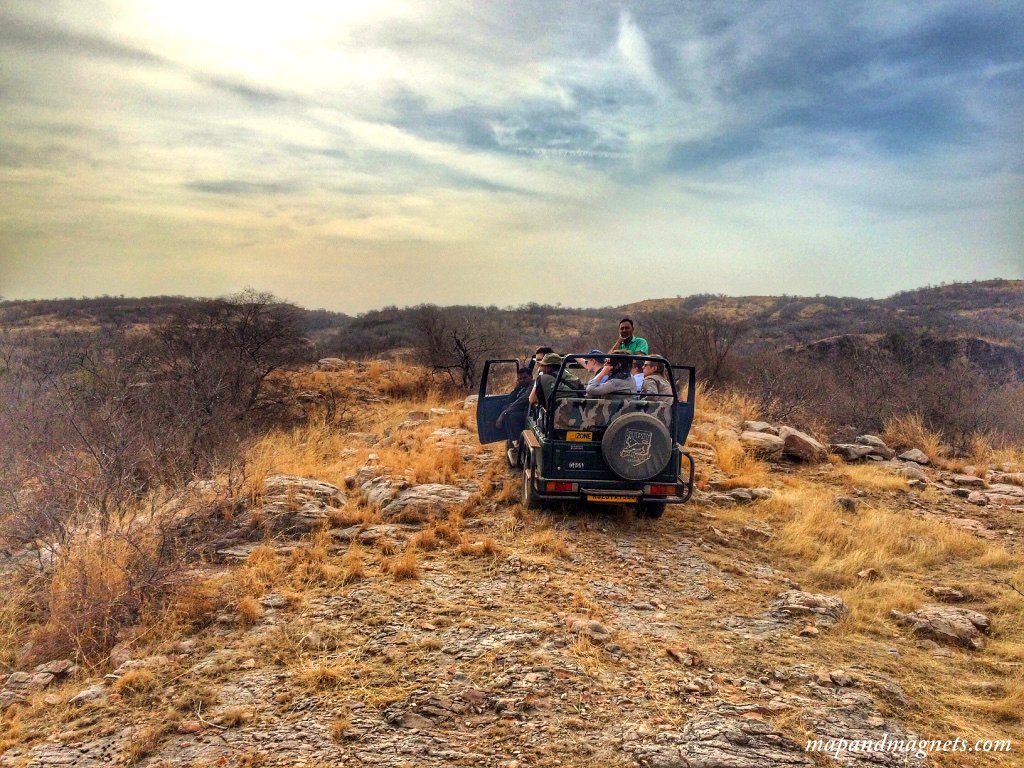 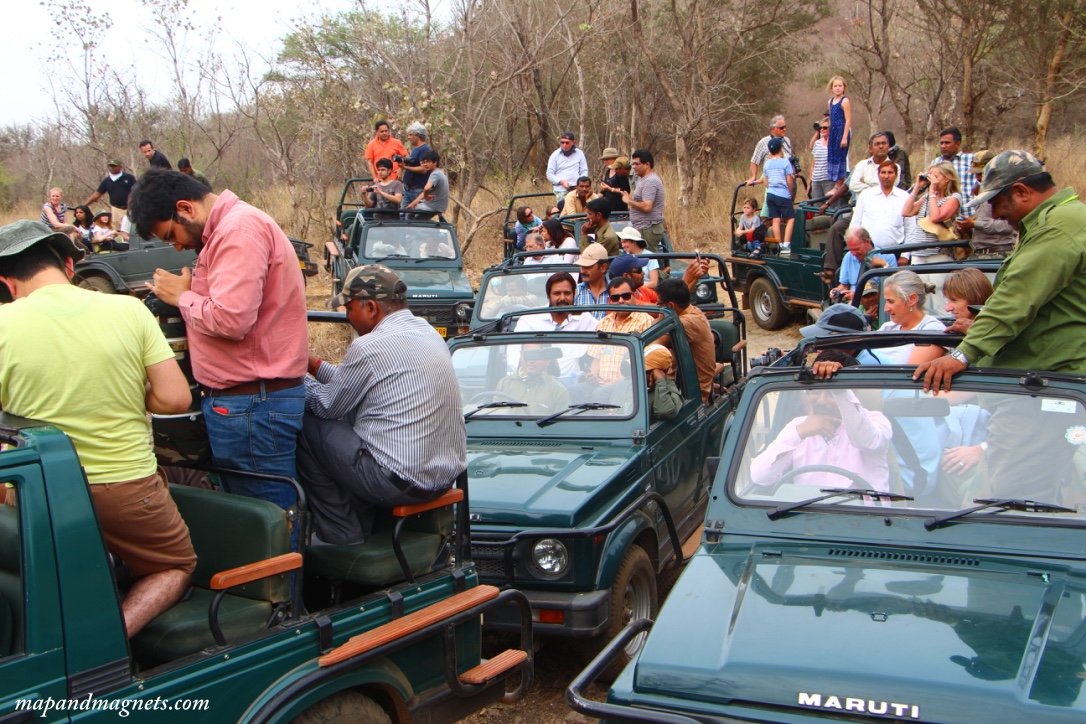 It gets kind of crazy once a tiger is spotted…news spreads fast! Be nice and move your vehicle when you’ve taken enough pictures! 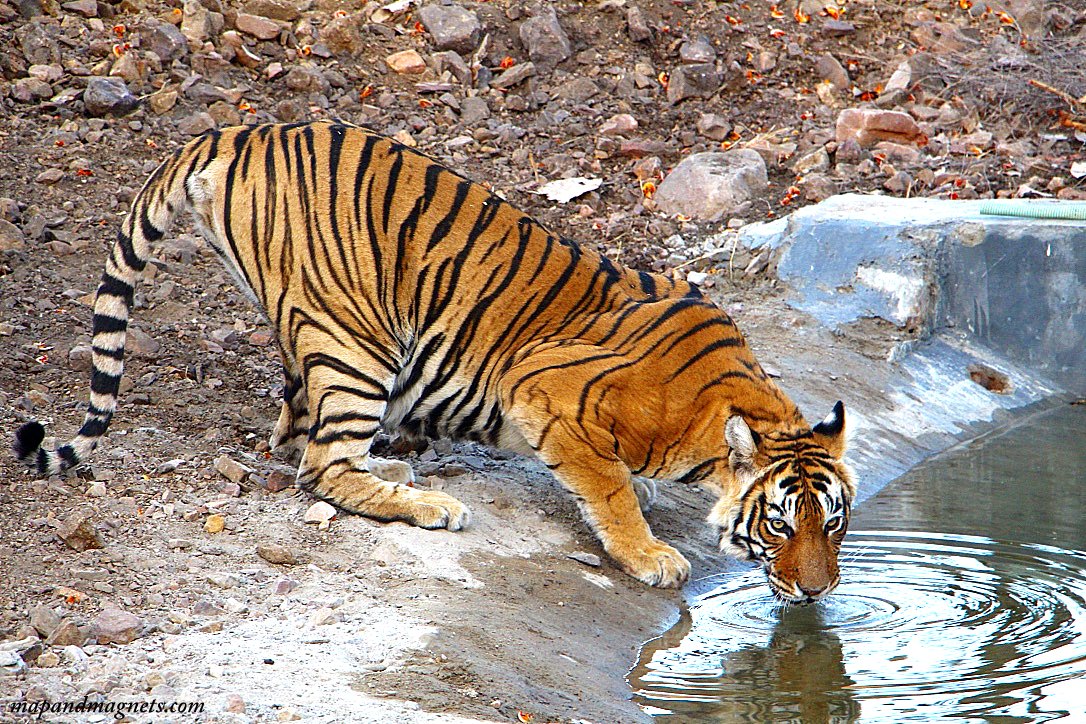 I would highly recommend a DSLR camera, with a large lens (300mm or more). I use the Canon EOS Rebel T5i 18-135mm, and lucked out with tiger sightings VERY close to my vehicle, which is why my zoom sufficed. Otherwise I’m not sure it would! You absolutely must capture tiger photos on a DSLR – that’s the only way to do it justice! 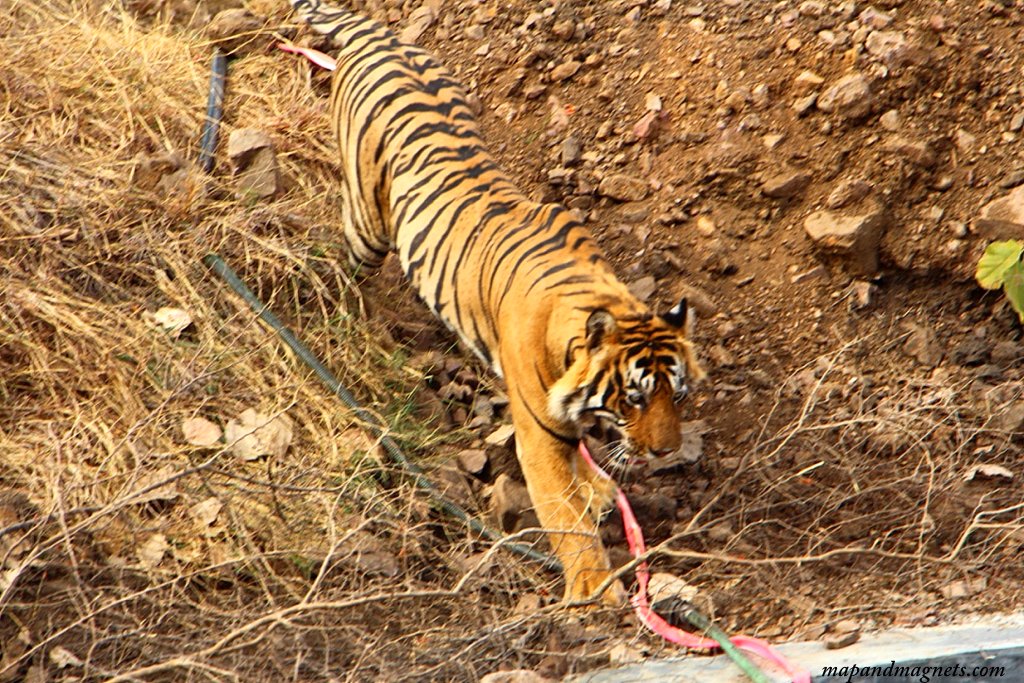 Only thing I didn’t like was the manmade pools the forest authorities had constructed. Those pipes and concrete ruin the natural look of the wild! 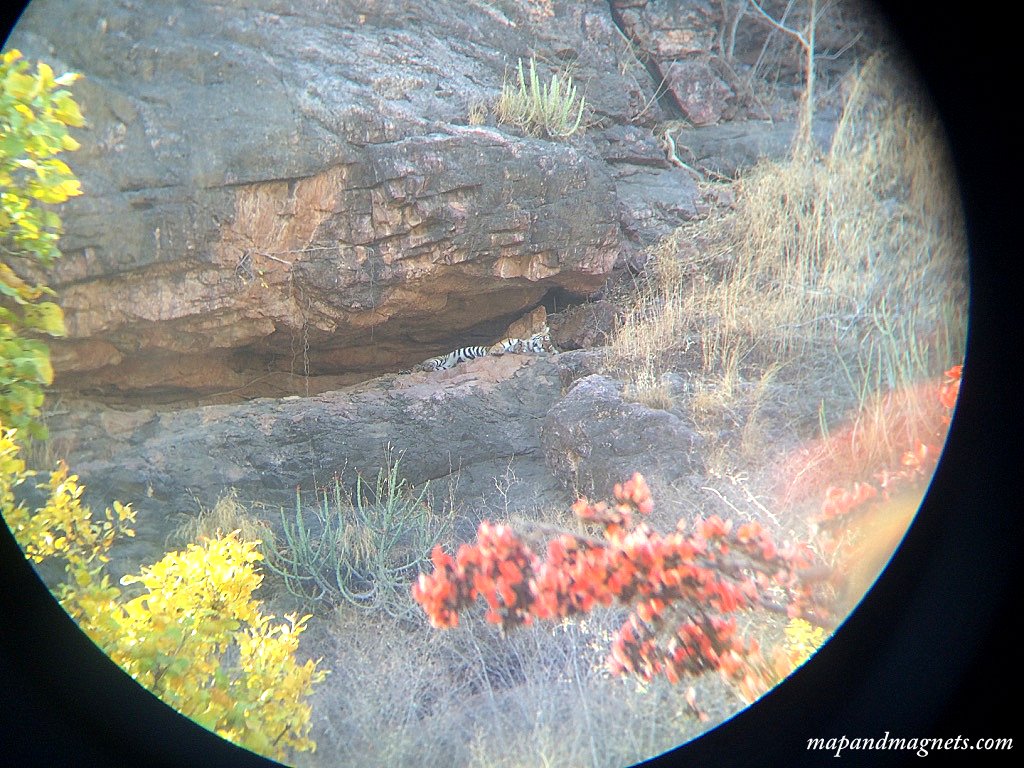 Unfortunately, I didn’t have a great zoom lens so had to photograph this tiger sleeping high up in a cave through binoculars! 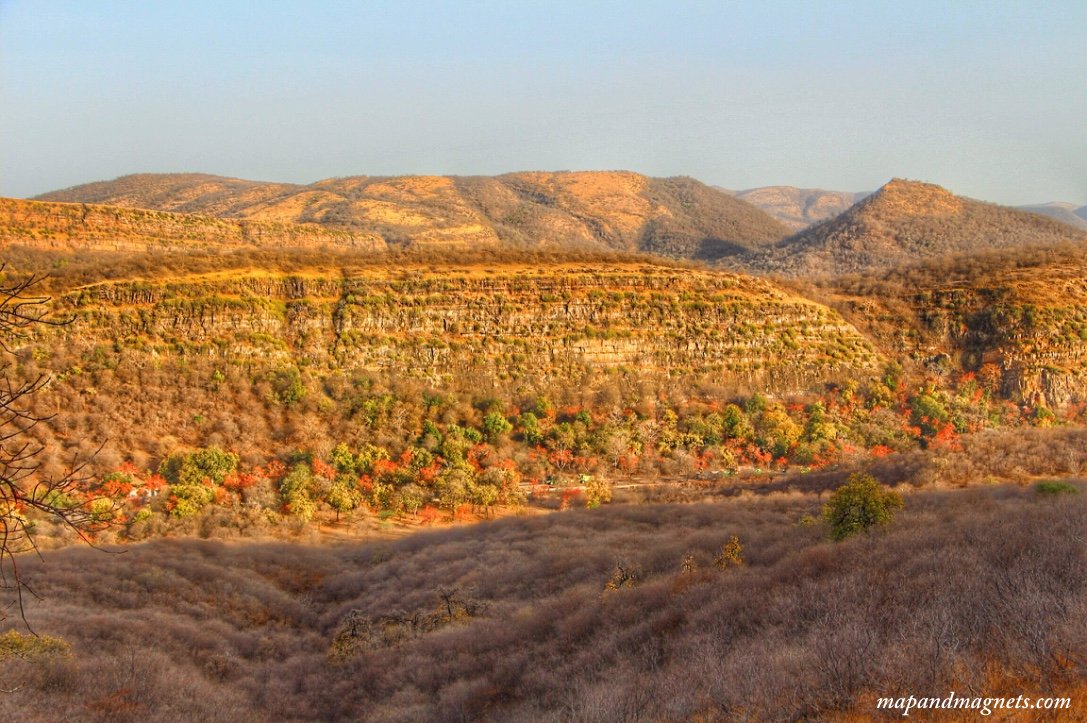 Summers are dry in Ranthambore, but there’s still something so magical about it!

2 Days in Cambodia: A Guide to Angkor Wat & Beyond

Offbeat Paris: 12 Experiences You Must Have