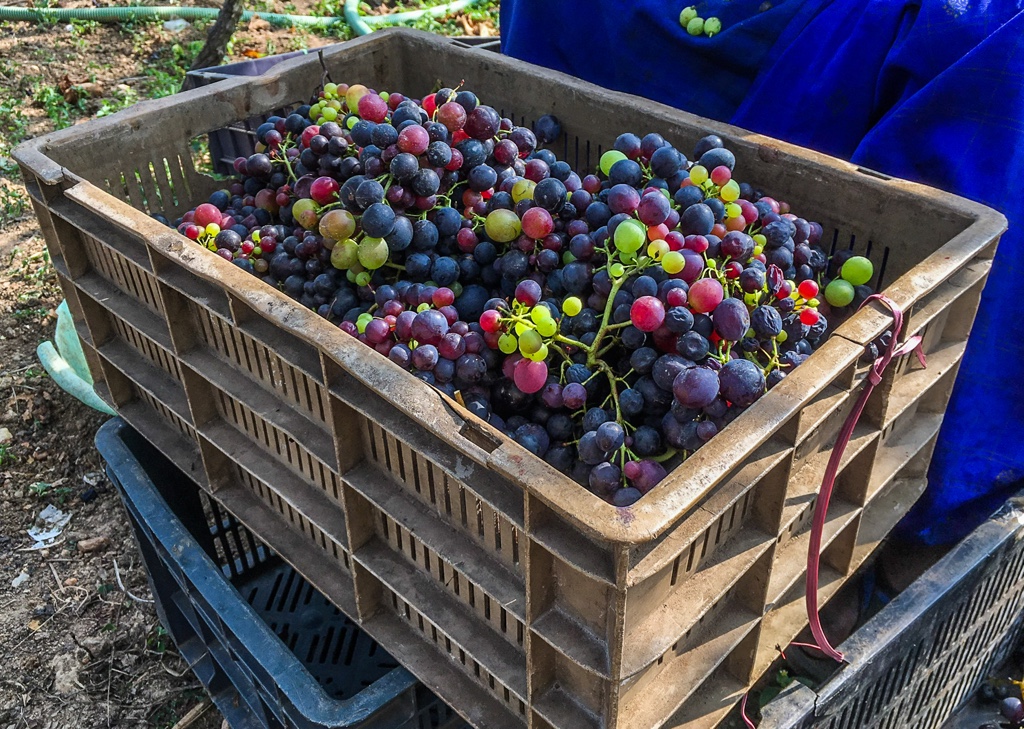 Earlier this year, I visited the Nilgiris mountains in South India, a hidden gem even amongst Indians (and thank god for that! Although wait, did I just let out the secret?! OOPS). Until two years ago, I’d never heard of them myself! The Nilgiris (literally translating to ‘Blue Mountains’) is a beautiful region in the South Indian state of Tamil Nadu, with winding roads, tea plantations and coffee estates. It is a UNESCO World Heritage site, and one of the top ten most biodiverse regions in the world. The Nilgiris is also one of the major tea producing districts in India (making black and oolong), along with Assam and Darjeeling. Interestingly though, while tea growing is seasonal in the other two regions, it grows year long in the Nilgiris. This means that you can visit a tea plantation any time of the year! On my recent trip to the Nilgiris, I spent a beautiful 3 days at a friend’s vineyards, nestled in the mountains in the village of Kookkal. I decided to catch up with her to learn more about vinotherapy and viticulture, what makes the Nilgiri grapes special, and how they’re harvesting grapes, not for wine making, but for SKINCARE! Here are snippets of our conversation:

Tell me more about how you acquired the vineyards

As a family, we moved around the world a lot, living in countries like France and Vietnam. So, my father has had a lot of exposure to winemaking, and always dreamed of setting up his own vineyards some day. In 2007, we acquired land in the Nilgiris, with the goal of exploring viticulture at a high altitude in the mountains.

Wait, what’s the difference between viticulture and vinotherapy?

Viticulture is the science of studying grapes and their production, most commonly associated with processes in a vineyard. Vinotherapy, on the other hand, is a therapeutic beauty process where grape extract is applied to the skin for its anti-ageing and nourishing properties.

I feel wiser already! So, what makes these Nilgiri vineyards unique?

Grapes typically grow on flat lands, at altitudes not higher than 1500 feet. Our vineyards in the Nilgiris are at 5300 feet above sea level! They are arguably the highest altitude vineyards in India, and among the highest in the world. The famous wine-producing Mendoza region in Argentina tops the global list, at 10,000 feet. But there are probably only about 50 vineyards across the world, at elevations between what we have in the Nilgiris and the Mendoza region (i.e. 5000-10000 feet). So it’s definitely unique to be growing grapes at such a high altitude.

We consulted several viticulture experts from India and around the world to understand the possibility of growing grapes at this altitude. Some said it was impossible; some said it could be done but there was no way to predict the profile of the grapes we’d get – it would be unlike anything else! We were determined and excited to explore this further!

Got it… how many varieties of grapes are there in the world? How did you decide on one for your vineyards?

There are about 10,000 varieties of grapes, according to the Food and Agriculture Organization. And they differ in color (black, red and green), whether they’re seeded or not, and whether the end use is intended for wine or for table. Generally speaking, seeded grapes are sweeter, and used for wine. For example, green seeded grapes produce white wines, while red/black seeded grapes produce red wine. We picked a seeded black varietal called the Black Muscat, because of its suitability to grow at high altitudes. That’s so cool! So then, what makes these grapes so good for the skin?

We started planting grapes in 2010, originally with the intent of exploring both vinotherapy and winemaking. However, very quickly, we discovered that the grapes were adapting to the Nilgiris’s high altitude and subsequent strong exposure to sunlight and UV rays. As a natural defense mechanism, they were developing thicker skins and seeds. The seeds and skins typically house a majority of the total antioxidant properties of a grape, and so, because our grapes had thicker skins and seeds, they had a much higher antioxidant content compared to regular grapes; when we tested this out, we found it was 5.4x higher! Antioxidants are extremely great at providing nourishing, moisturizing, cleansing and anti-ageing benefits to the skin. So, this was super exciting! How did you foray into skincare then?

When we discovered the magical antioxidant content of our grapes, we decided to focus on skincare first. We worked with a formulations expert and cosmetologist in Mumbai to create some products. When we first started, we had no idea what kind of product we should make. We literally handed over a bag of grapes to the formulations expert! But we knew one thing: we wanted to ensure that we had the highest concentration of active ingredients (in this case, grapes) compared to usual skincare products. We also wanted to be free of sulphates, parabens, soaps, petroleum derivatives, animal origin ingredients, and artificial fragrances. So our first product was a skin gel. The gel is literally made from whole crushed grapes, in their purest form. Unlike usual vinotherapy treatments which use grape residue from winemaking, we use the entire grape!

Tell me more about your all-natural approach.

We’re trying to keep the cultivation process as natural as possible. Human beings aren’t intervening in forests and wild areas, right? Trees are still flourishing; flora is still thriving! We wanted to mimic that in the vineyards. The governing principle of our vineyards is “minimal intervention”. We intervene as little as possible whether it’s irrigation, pesticides or fertilizers, with the ultimate goal of zero intervention one day. We’ve also switched from cow manure to bison manure, because we found that the bison diet is much more nutrient-rich. It’s funny because since they are wild animals and roam freely in the Nilgiris, we literally send out field staff looking for bison manure in the mountains. We also use bison manure to integrate the Nilgiris ecosystem into our viticulture. Being true to the ecosystem is really important to us!

We are starting to expand our range, and have some exciting products in the pipeline for hair, body and skin. Not only with grapes though! We are sourcing local produce from the Nilgiris such as avocadoes, honey, coffee and green tea to develop a range of personal care products. The idea is to introduce people to natural ingredients they may not have commonly seen in skincare and beauty. Look out for an avocado hair conditioner very soon. This is the first time I’m doing a post like this, but I feel so strongly about environmental conservation and maintaining ecosystems as they were meant to be, that I had to share this story. Whenever I travel, I am always curious to learn more about what makes a city, town or region unique. What do locals do, eat, grow, and talk about? The entire approach of Gravitale is just so natural: a homegrown business that is linked so closely to nature, and that promotes and preserves unique national assets. I had to share this story! Somewhere the chemical engineer nerd in me also got a wee bit excited learning all about viticulture 😀

*This post was not sponsored by Gravitale, and all opinions are my own. It was just a story I really wanted to share